Life has not been kind to Everline Towett but she has made her mission to help others. 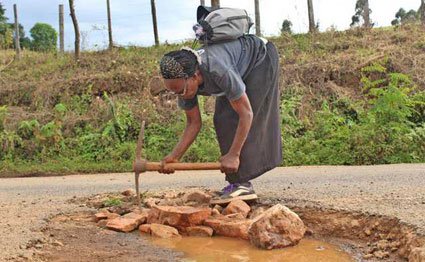 Mrs Everline Towett, 66, fixes a pothole on the Tenwek road. She has made it her life’s mission to help others even when life has been unkind to her. PHOTO | COURTESY

It is a touching story of a widow whose happiness left with the sad demise of her missionary husband, Mr Edward Tonui, in a road crash in 1997 and 17 years later, the death of her son in another accident on a potholed section of the same Tenwek road.

It is not unusual to find widows being kicked out of their matrimonial homes by in-laws upon the death of their husbands.

But it’s not easy to find those who outgrow their grief and humiliation to the extent of sacrificing their time to help others to avoid similar pain.

Mrs Everline Towett, a 66-year-old widow from Bomet County, hit the headlines a week ago for her selfless decision to repair a treacherous road leading to Tenwek Mission Hospital in Bomet County.

It is a touching story of a widow whose happiness left with the sad demise of her missionary husband, Mr Edward Tonui, in a road crash in 1997 and 17 years later, the death of her son in another accident on a potholed section of the same Tenwek road.

“Since my husband died, I have largely lived an empty life of suffering. I have been thrown out of my matrimonial home and left desolate. And looking at this dangerous road, I get scared at the thought that someone else could lose their spouse and end up just like me,” the mother of two told the Nation .

In December, she witnessed an old man who had just had a surgery cry in pain on a motorcycle while begging the rider to slow down.

Mrs Towett woke up one day and took it upon herself to do what many citizens would not. On December 12, 2018, she took a wheelbarrow, borrowed a hammer, collected stones from the roadsides and begun filling potholes on the stretch leading to the renowned referral facility.

She would thereafter dedicate a bit of her time every day to a particular section of the road and break her back fixing it as pedestrians and motorists simply looked on.

What amazed many who heard the story is that Mrs Towett may not have the happiest of lives; if anything, it is desolate at best, but she seems to create or seek her happiness through making other people happy.

“The Bible encourages us to use our wisdom to judge situations and do the needful. I am fixing this road for all but mostly for my own sake, my joy and gratification,” she said.

“I would like more people to live with their spouses and children and all their loved ones. If it were up to me, I would save people from all ills that take their spouses away.”

She narrated how distressing life can be for a widow in a society that does not care. She wants to be different and show some kindness even when she lacks.

“I have been through so much. I even started a process of claiming some benefits left behind by my husband which was just Sh13,000 in 1997. I got frustrated in the process. The chief refused to sign the documents and I gave up,” she recalls.

She has since bought a piece of land, albeit with struggle, and constructed a small house where she lives together with her daughter and her late sister’s child who is under her care. Mrs Towett earns a living by making beads and carpets.