What are Canada’s shortcomings?

Having lived now in Canada, coming from an Asian background, I would say that Canada has several issues that I think need to be addressed:

The myths about Canada's skill gap Note that it is worse than the US. Be more like the Swiss or the Nordic nations it would seem is the way to go.

Note the decline in R&D too since about 2005. It peaked around 2001 and then seemed to stagnate, but is now in rapid decline. Business R&D is falling rapidly, and government R&D is falling slowly too. First of all, the Canadian government must immediately reverse the trends since 1981 of cutting. Even more shocking is the drop in business R&D.

Note of course how bad business R&D is compared to the rest of the world: This must be reversed immediately. There is a reason why South Korea is still rising and why Israel, despite its smaller population, often is at the forefront of many technologies. Japan also punches above its weight and I believe that the stagnation or “Lost Decade” hides the fact that Japan actually leads the world in many areas, especially producer goods. Canada is way behind the US as well.

It can be difficult for immigrants as well to get settled in because Canadians often only recognize Canadian experience and credentials.

Is the Canadian dollar a petrocurrency?

This is an extremely alarming development and one you would expect from a nation whose economy is not diversified. To be fair, Harper’s predecessors must also take their share of the blame on this one. So in that regard, the past several Prime Ministers and their respective Cabinets must all take responsibility their share of the blame. It is only now with the price of oil dropping that the Canadian dollar seems to be decoupling from price of oil.

As far as overall Canada’s performance in healthcare: 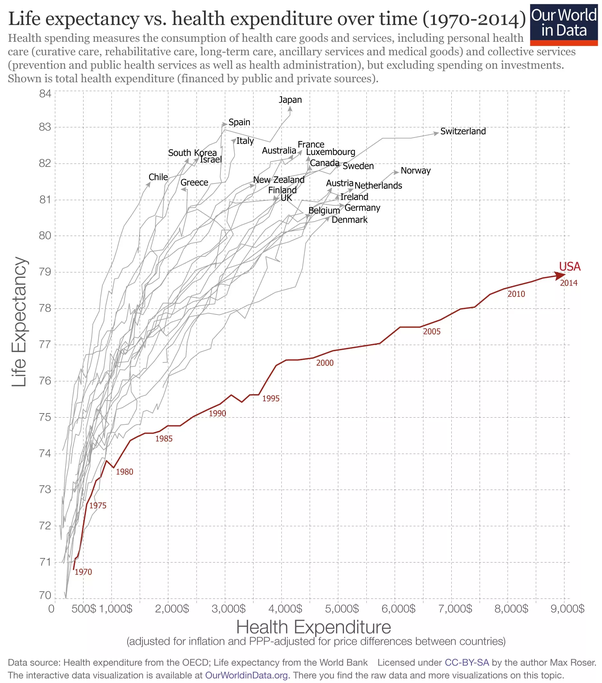 It is certainly better than the US, but it seems to be in the middle of the pack. Finding opportunities for cost savings would be a big plus. I suspect that dental care, if made universal (as it resembles the US more than anything else) might lead to similar cost savings.

It’s difficult to answer this question in greater detail without going on for pages or for that matter about specific areas that the question asker wants. I have focused on the challenges I think that Canada could solve.

There are some inherent challenges, such as the northern climate, the large size combined with low population density concentrated along a line near the US border, etc. I have tried to structure this answer around the “self inflicted” problems though (ex: we can’t change our latitude from the equator!).

Canada is certainly not the only nation with these challenges, but I think that these are the most serious problems that Canada faces.

What is something common that you see most people do wrong?
By lanreadeyemi • 5 months ago

Which country will be the world's leading economic power in 2050 and why?
By lanreadeyemi • 5 months ago

What upsets Nigerians?
By lanreadeyemi • 6 months ago

Can Nigeria achieve good governance?
By lanreadeyemi • 6 months ago

What should people avoid going into their old age?
By lanreadeyemi • 6 months ago