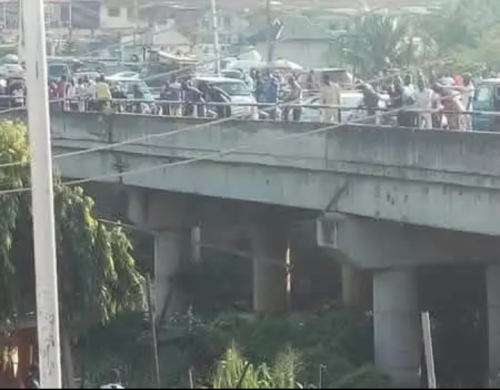 Tragedy struck on Thursday evening in Osogbo when one unidentified middle-aged man allegedly jumped into a  river in Osun, in an attempt to commit suicide.

Though circumstances surrounding the incident still remain sketchy as of the time of filing this report, Tribune Online authoritatively gathered that the sad incident occurred around 6.15pm near Gbodofon bridge, Osogbo on the stretch of Gbongan-Ibadan expressway.

The development attracted the attention of motorists and passerby, who thronged the scene to catch a glimpse of the rescue efforts by men of the Osun State Fire Brigade Service and policemen.

There was traffic gridlock around Aregbe and Old Governor’s office areas of Osogbo as the incident hindered the free movement of vehicles and other road users.

However, efforts being made to rescue the by the policemen and firefighters were unsuccessful as the man could not be salvaged inside the river.

One of the eyewitnesses informed our correspondent that the unidentified man may have committed suicide by jumping into the river.

When contacted, the Police Public Relations Officer (PPRO) of Osun State Police Command, Mrs Folasade Odoro confirmed the incident, saying the Police have commenced an investigation into the matter.