A woman has refused to attend her son's wedding ceremony after the man proceeded to 'marry' a hologram. 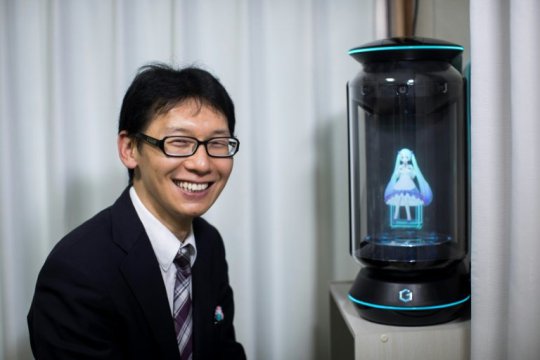 Akihiko Kondo with his wife, the hologram of Hatsune Miku (Image: AP)
A 35-year-old school administrator from Japan has ‘married’ the hologram of a virtual reality pop star named Hatsune Miku. The man's mother refused an invitation to attend the ceremony apparently over its weirdness.
Miku, who is characterised as a 16-year-old girl with long turquoise pigtails and giant saucer-shaped eyes is a bit of a phenomenon in Japan.
She’s actually a computer program and has had chart-topping songs and sell-out concerts where she appears as a hologram.
But for Akihiko Kondo, the relationship is a little more personal.
‘I’m in love with the whole concept of Hatsune Miku but I got married to the Miku of my house,’ he said. 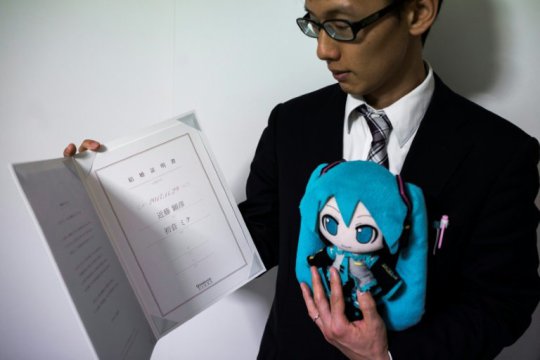 Akihiko Kondo with his marriage certificate and the doll version of his wife (Image: AP)
The Miku of his house is a personalised hologram of the singer that floats inside a $2,800 desktop capsule. A personalised hologram he loves so much that he paid $17,600 on a formal ceremony at a hall in Tokyo that was witnessed by 40 guests.
The hologram couldn’t make it to the ceremony so she was represented by a stuffed doll likeness.
‘I never cheated on her, I’ve always been in love with Miku-san,’ Kondo said of his bride.
They’ve been living together since March. 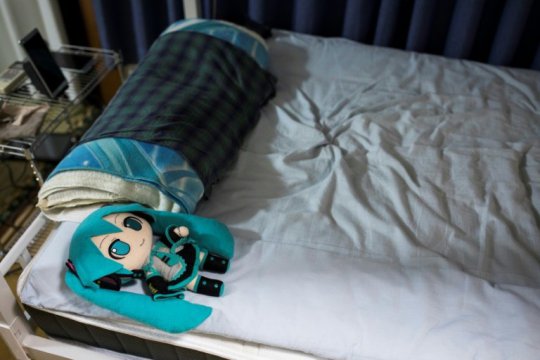 Kondo sleeps alongside the doll version of Hatsune Miku (Image: AP)
He considers himself an ordinary married man—his holographic wife wakes him up each morning and sends him off to his job at the school.
In the evening, when he tells her by cellphone that he’s coming home, she turns on the lights. Later, she tells him when it’s time to go to bed.
He sleeps alongside the doll version of her that attended the wedding, complete with a wedding ring that fits around her left wrist.
Kondo’s marriage might not have any legal standing, but that doesn’t bother him. He even took his Miku doll to a jewellery shop to get the ring.
And Gatebox, the company that produces the hologram device featuring Miku, has issued a ‘marriage certificate”, which certifies that a human and a virtual character have wed ‘beyond dimensions’. 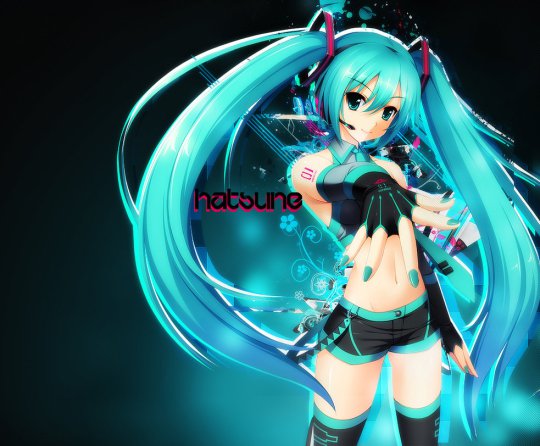 Hatsune Miku is a superstar in Japan despite not being real
Kondo’s not alone either: he says Gatebox has issued more than 3,700 certificates for ‘cross-dimension’ marriages and some people have sent him supportive messages.
‘There must be some people who can’t come forward and say they want to hold a wedding. I want to give them a supportive push,’ he explained.
Even in a country obsessed with anime, Kondo’s wedding shocked many. But he wants to be recognised as a ‘sexual minority’ who can’t imagine dating a flesh-and-blood woman.
‘It’s simply not right, it’s as if you were trying to talk a gay man into dating a woman, or a lesbian into a relationship with a man.’
‘Diversity in society has been long called for,’ he added.
‘It won’t necessarily make you happy to be bound to the ‘template’ of happiness in which a man and woman marry and bear children.’
‘I believe we must consider all kinds of love and all kinds of happiness.’
Related Post viewed by other