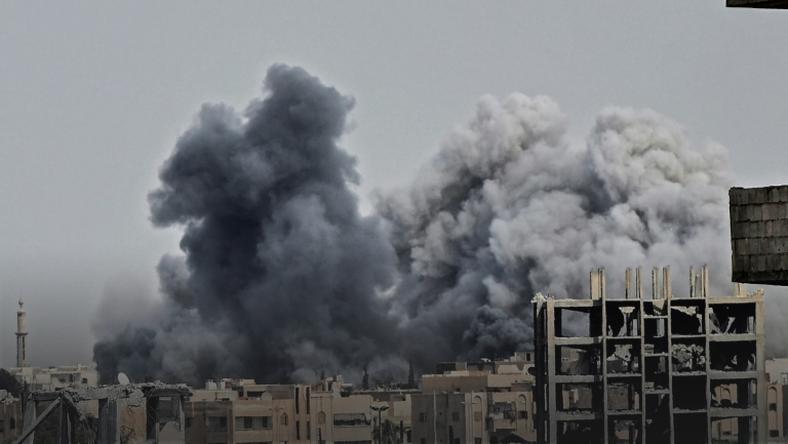 The findings were compiled after months of field research and extensive data analysis, including via a project that saw 3,000 digital activists scan satellite imagery online.

In mid-2017, Raqa had been the de facto Syria capital of the Islamic State group's cross-border "caliphate" for three years and the US-led coalition launched a military campaign to crush the jihadists in their main remaining hub.

The unprecedented investigation, carried out by Amnesty International and the Airwars monitoring group, urged top coalition members to show more transparency and accountability.

"Many of the air bombardments were inaccurate and tens of thousands of artillery strikes were indiscriminate," said Donatella Rovera, crisis response advisor at Amnesty.

The civilian death toll for the coalition campaign, which supported Kurdish-led ground forces in their successful advance against IS, stands at more than 1,600, according to the report.

The coalition has admitted to around 10 percent of those deaths, it said.

"Amnesty International and Airwars call upon the Coalition forces to end their denial about the shocking scale of civilian deaths and destruction caused by their offensive in Raqa."

Rovera said a number of reasons explained the high casualty toll among civilians, including failing intelligence and surveillance, and the use of inappropriate weaponry.

In many cases, buildings in Raqa were targeted following insufficient remote surveillance, Rovera said, killing entire families that were still living or sheltering in them.

"If there had been adequate surveillance of these buildings... a civilian pattern of life would have been very detectable," she told AFP.

Rovera, who spent months going to strike sites in Raqa since it was captured by the US-backed Syrian Democratic Forces in October 2017, also said the coalition's choice of weapons was a problem.

"It may have to do with money," Rovera said.

"There are, more expensive, smaller impact-radius missiles, but the coalition often used... old MK-type bombs that take out entire buildings. Those are much cheaper," she said.

Amnesty also criticised the extensive use of artillery in the battle of Raqa, which one US military official boasted was the US's highest since the Vietnam war.

"With a margin of error of more than 100 metres, unguided artillery is notoriously imprecise and its use in populated areas constitutes indiscriminate attacks," the London-based rights group said.

The investigation into the civilian deaths resulted in an interactive, immersive website that includes pictures and videos of destroyed homes, the names of the families killed and links to data gathered from a variety of sources.

One of them was a project called Strike Trackers, which employed digital volunteers from 124 countries to identify each one of the 11,000 destroyed buildings in Raqa by analysing more than two million frames of satellite imagery.

"Many of the cases documented by Amnesty International likely amount to violations of international humanitarian law and warrant further investigation," Amnesty said.

It urged coalition members, especially the United States, Britain and France, to put in place an independent investigation mechanism and create a fund to compensate civilian victims.

The coalition responded by saying it investigated reports submitted to it by various sources, including Amnesty, and complied with international humanitarian law.