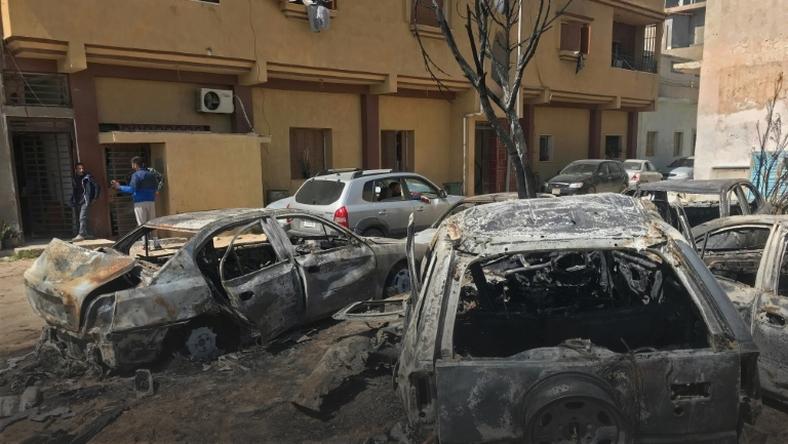 Diplomats have long complained that Libyan peace efforts have been stymied by major power backing for the rival sides and Haftar ally Russia has quibbled over the proposed wording of the ceasefire demand even as the bombardment of Tripoli intensifies.

Two of the dead in the rocket fire on the south Tripoli neighbourhoods of Abu Salim and Al-Antisar were women and 11 people were also wounded, the emergency services said.

AFP journalists heard seven loud explosions as rockets also hit the city centre, the first since Haftar's Libyan National Army militia launched an offensive on April 4 to capture the capital from the government and its militia allies.

The LNA blamed the rocket fire on the "terrorist militias" whose grip on the capital it says it is fighting to end.

The bombardment came as diplomats at the UN Security Council began negotiations on a British-drafted resolution that would demand an immediate ceasefire in Libya.

The proposed text seen by AFP warns that the offensive by Haftar's LNA "threatens the stability of Libya and prospects for a United Nations-facilitated political dialogue and a comprehensive political solution to the crisis."

After Britain circulated the text late Monday, a first round of negotiations was held during which Russia raised objections to references criticising Haftar, diplomats said.

"They were very clear. No reference anywhere," a council diplomat said.

During a tour of the Tripoli neighbourhoods worst hit by the rocket fire on Tuesday night, unity government head Fayez al-Sarraj said the Security Council must hold Haftar to account for his forces' "savagery and barbarism".

"It's the legal and humanitarian responsiblity of the Security Council and the international community to hold this criminal responsible for his actions," Sarraj said in footage of the tour released by his office.

He said his government would seek Haftar's prosecution for war crimes by the International Criminal Court in The Hague.

"We are going to hand all the documentation to the ICC tomorrow (Wednesday) for a prosecution for war crimes and crimes against humanity," he said.

At least 174 people have been killed and more than 18,000 displaced since Haftar ordered his forces to march on Tripoli on April 4, according to UN figures.

Britain was hoping to bring the ceasefire resolution to a vote at the Security Council before Friday, but diplomats pointed to Russia's objections as a hurdle.

The proposed measure echoed a call by UN chief Antonio Guterres, who was in Libya to personally advance prospects for a political solution when Haftar launched his offensive.

Haftar, seen by his allies Egypt and the United Arab Emirates as a bulwark against Islamists, has declared he wants to seize the capital.

Haftar backs a rival administration based in eastern Libya that is refusing to recognise the authority of the Tripoli government.

The draft resolution calls on all sides in Libya "immediately to recommit" to UN peace efforts and urges all member states "to use their influence over the parties" to see that the resolution is respected.

Resolutions adopted by the council are legally binding.

Diplomats have long complained that foreign powers backing rival sides in Libya threatened to turn the conflict into a proxy war.

Saudi Arabia is also seen as a key Haftar supporter, while Qatar -- which has tense ties with Riyadh and Abu Dhabi -- has called for stronger enforcement of the UN arms embargo to keep weapons out of Haftar's hands.

Russia and France, two veto-wielding permanent members of the Security Council, have praised Haftar's battlefield successes in defeating Libyan militias aligned with the Islamic State group in the south of the country.

Haftar's offensive on the capital forced the United Nations to postpone a national conference that was to draw up a roadmap to elections, meant to turn the page on years of chaos since the 2011 ouster of Moamer Kadhafi.

Guterres has said serious negotiations on Libya's future cannot resume without a ceasefire.