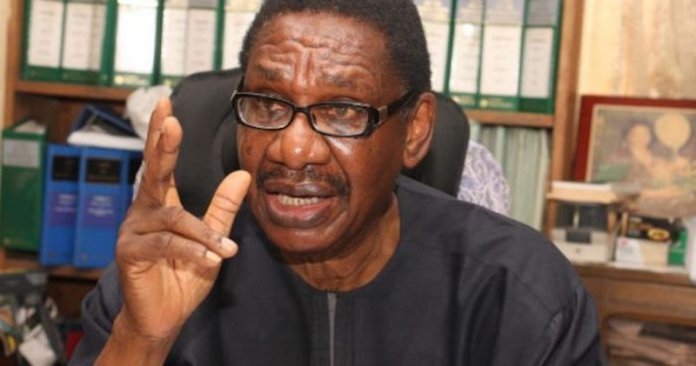 The Chairman, Presidential Committee on Anti-corruption, Professor Itse Sagay, has urged the youths and women of Itsekiri tribe in Delta State to fight corruption with the primary objective of achieving development in Ugborodo New Town, Warri, in the state.

According to Sagay, they need to monitor and ensure that the people who are assigned to execute projects actually do that, instead of embezzling the funds and leaving the projects abandoned.

He said: “We have been having discussions on this issue for the last two years, I think Warri has a structural problem, there is no defined transparent authority to explain how the deals are made and monitored the development of the funded projects.

“A few people collect these funds and then there is no development in the region. We the people of Itsekri need to unite to let these corrupt people know that we have had enough and we are ready to come together to fight for what our region deserved, which is justice.

“Other ethnic groups have not been tolerating this type of situation; I would say the Itsekiri people are tolerating it. We are one of the richest nations in the world; so, we will not keep quiet about this corruption.”

Also speaking at the event, Lagos-based activist, Chief Rita-Lori Ugbebor, said: “As Itsekiri mothers from the Warri region, we have come to discuss and find solutions to the controversies going on in Ugborodo community in Warri.”

The veteran journalist lamented that “sadly, efforts to save Ugborodo from being washed away are being obstructed by people who were entrusted with money concerning the development of the area.

“For instance the primary reason we are here is to discuss the development situation of this region, and accountability for the funds that have been allocated to execute these projects.

“In 1999, funds were allocated to develop Ugborodo an oil and gas rich community in Delta State, into an ultra- modern town. To make sure the project could be executed, Chevron contributed six million dollars into the Itsekiri Regional Development Council’s (IRDC) account.

“In 2011 Delta State Oil Producing Area Development Commission (DESPADEC) paid one billion naira to the office of the Honorable Chairman for the development of Ugborodo New Town. Today the project has been described in DESOPADEC official contract document as completed and completely paid for.

“However, apart from 15 units of bungalows at foundation level in the area there is nothing that has been done to justify and account for the large amounts of funds disbursed for the development of the oil and gas-rich region.