Two firefighters have been killed after a huge explosion at a bakery in the French capital, Paris, officials say.

The emergency services were responding to a gas leak when "a dramatic explosion" occurred, said Interior Minister Christophe Castaner.

New anti-government protests are being held in Paris and other French cities.

Some 80,000 police officers were due to be on duty on Saturday as "yellow vest" demonstrators keep up their pressure protest, even though the Paris explosion is not thought to be connected with the demonstrations.


In the immediate aftermath, smashed cars and debris from other shop fronts littered the street in front of the burning bakery as people stood around, looking stunned by the force of the explosion.

The death toll of two was confirmed minutes after the interior minister had said that four people - including two civilians - had died.

What happened?
The Hubert bakery at No 6 Rue de Trévise was not due to be open at the time of the blast, Le Parisien newspaper reports.

A gas leak had been reported in the building and firefighters had been on their way to deal with it when the explosion occurred. 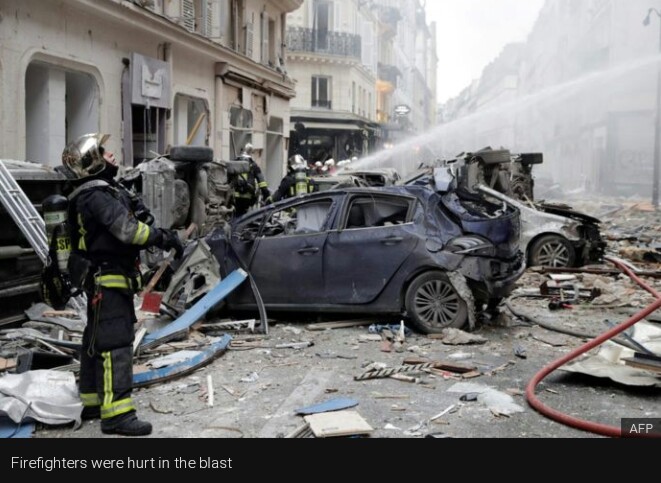 Helicopters landed on the nearby Place de l'Opéra to evacuate the injured, Reuters news agency reports.

A passing journalist, Emily Molli, described the vast extent of the damage.


A resident named Killian was asleep when the explosion blew in his windows. Everybody in the building came downstairs, he said, and he could hear screaming.

"I was sleeping and woke up by the blast wave," Claire Sallavuard told AFP news agency.

"All the windows in the apartment exploded, doors were blown off their hinges, I had to walk on the door to leave the room, all the kids were panicking, they couldn't get out of their room." 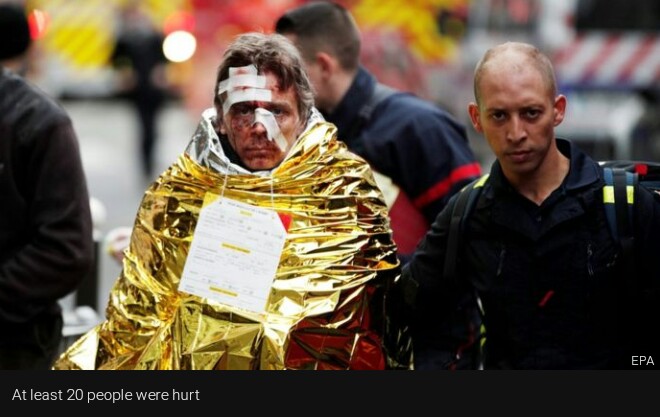 Paula Nagui, a receptionist at the nearby Diva Hotel, said there had been an "enormous blast" that shattered all the windows.

Anxious guests had received assurances that it was not a terror attack, she told Le Parisien.

Why such heavy security for the protests?
For the ninth Saturday in a row, demonstrators are turning out to criticise the government's policies in a mass phenomenon which began with a protest over tax on vehicle fuel on 17 November.

Called the "yellow vests" because of the colour of the high-visibility vests they wear symbolically, they have disrupted traffic on roads and in towns across France, and their marches have descended into some of the worst rioting France has seen in decades.


Yellow vests could be seen gathering outside the finance ministry in Paris on Saturday. 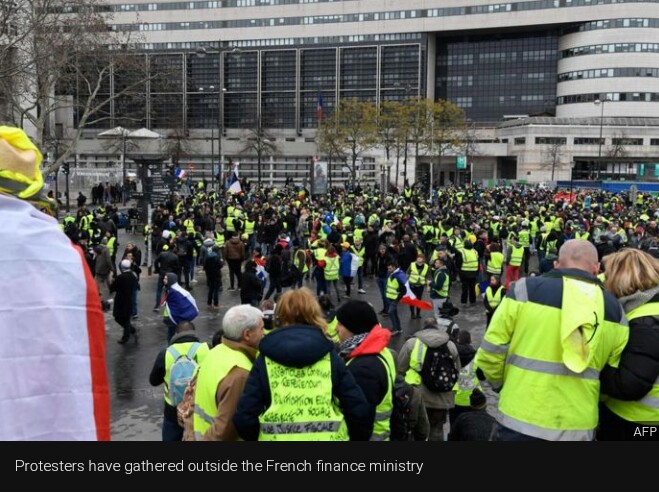 Ten deaths have been linked to the unrest, all but one in traffic accidents, the tenth being an elderly woman hit in the face by a tear gas grenade in her flat in Marseille.

More than 1,500 people among the demonstrators have been injured, 53 of them seriously. Nearly 1,100 members of the security forces were also hurt, French TV reported on 5 January.

As of 6 January, 5,339 people had been taken into custody and 152 had been sent to prison, the justice ministry told L'Express newspaper