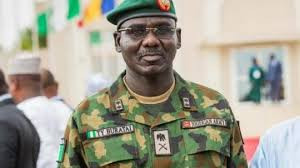 The Nigerian Army has denied reports that it is pre-maturely retiring officers that are of the Christian faith and come from a certain part of the country.

Read the statement from the Nigerian Army below;

The Defence Headquarters has noted with dismay a mischievous and systematic campaign of calumny against the government through spurious and unfounded allegations of lopsided recruitment, postings, appointments and retirements of military personnel by the Armed Forces of Nigeria (AFN).

Specifically, by an obscure online blog owned by one Sola Kuti which he christened "SK Blog." The blogger without recourse to any effort of finding out the truth, accused the Nigerian Army of systematic retirement of over 200 officers from particular geo-political zone and religious group in the first quarter 2019 and secret recruitment into the services, without giving further details. Ordinarily, one should not bother about it because it is not true and born out of the figment of the writer's imagination. However, it is imperative to correct the erroneous impression being created in the mind of some members of the public. Therefore, it is important to reiterate that postings, appointments and retirements in the military are routine activities and common public knowledge. Every officer, soldier, rating, airman or woman on commission or enlistment into the Services look forward to an exciting, adventurous and rewarding career in the Armed Forces and most importantly knows exactly when he or she is due to retire. Officers, soldiers, ratings, airmen and women are not only conscious of this but look forward to it. Personnel often retire based on age on rank or length of Service. In the event of approaching retirement, the affected person or persons are given adequate notice and also prepared for life after Service through training programmes at either the Nigerian Army Resource Centre, or Nigerian Armed Forces Resettlement Centre, Oshodi. Therefore, it is irresponsible for anyone to allege that such exercises were targeted at a particular ethnic group or religion.

Similarly, recruitment and enlistment into the Armed Forces of Nigeria have always been made known to the public and follows transparent and well known procedures that are in line with best practices. We expected the writer to make effort of finding out the truth before misleading unsuspecting members of the public through such publication. He should have taken advantage of the various public affairs departments of the Services to enquire about such issues. Although we are not mindful of the fact that such write-ups are sponsored by some obviously unpatriotic and ignorant elements, it is instructive to state that the Armed Forces of Nigeria remain the cohesive and bastion of national unity and no amount of campaign of calumny would change that. Such things are alien and blasphemous in the military.

More also, the allegation of "unease and disquiet in the military formation" is not only untrue, but sheer mischief.

The public is implored to please disregard such insinuations as there are proper career plan and progression in the military, therefore, there is no such thing like premature retirement or deliberate attempt to cleanse a particular ethnic or religious group in any of the Services.