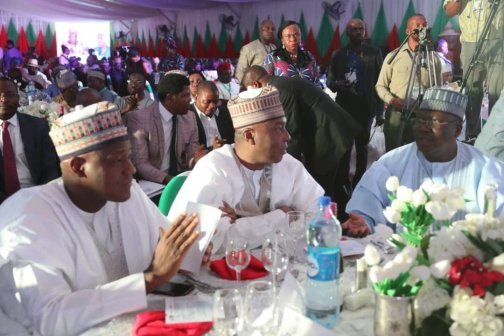 The leadership of the current National Assembly may be sounding tough, but beneath their tough utterances are fear and trepidation over the fate that could befall them after May 29 when they would have vacated their seats.

Their main headache is Senator Ahmed Lawan, the Senate Majority Leader who has been adopted as the candidate of the All Progressives Congress (APC) and President Muhammadu Buhari in the jostle for the seat of the Senate President in the 9th National Assembly.

The current leaders are indeed not looking into the future with confidence because they fear that Lawan would go after them at the promptings of the executive once he becomes the Senate President.

According to The Nation, one issue that is really troubling them is the loans they took to run their affairs. They are looking at the figures and already know that they face a Herculean task. You may wonder why they need such loans when they don’t embark on executive projects and all they spend money on are recurrent things.

Already, the Independent Corrupt Practices and Other Related Offences Commission (ICPC) has vowed to make the two chambers of the National Assembly account for funds allocated to constituency projects, and the figures are scary.

Little wonder the leaders of the two chambers are in desperate need of a candidate that will cover their tracks, and from what Sentry is gathering in Abuja, many of them want that assurance from APC that Lawan as Senate president will not look into the books.

They are indeed reaching out to people they believe to have an influence on both the Villa and Lawan, promising that once they are assured of their own safety, both Lawan and Hon. Femi Gbajabiala will have their ways as Senate President and Speaker of the House of Representatives respectively.