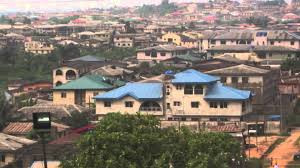 The police in Lagos state today arraigned a 31-year-old man, Godspower Johnson, before the Ebute Metta Chief Magistrate Court for allegedly beating his wife to death during a fight over s*x.

According to the police, Johnson committed the offence on March 21st at 5.30p.m. at their home in No. 28, Adekoye St., Igbo-Elerin, Ishashi.

The police prosecutor, Insp. Oladele Adebayo, told the court that on the day of the incident, Johnson had tried to have s*x with the deceased. He inserted his two fingers into her private part which did not go down well with the deceased who resisted and stopped him. This got him angry and he started beating her. She died from the injuries she sustained during the fight.

After hearing the police prosecutor's testimony, the Chief Magistrate, O.O. Olatunji, ordered that Johnson be kept at the Ikoyi Prison, Lagos, for the next 30 days pending advice from the state Director of Public Prosecutions on the case.

The case was adjourned ttill June 7th for mention.