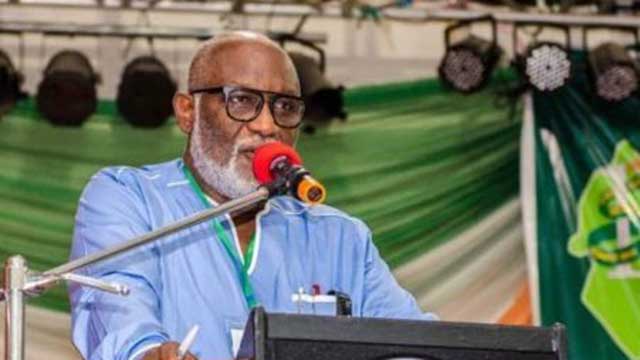 • Says Nothing To Worry About
Sequel to report that the National Working Committee (NWC) of the ruling All Progressives Congress (APC) has suspended him, the Ondo State Governor, Oluwarotimi Akeredolu, has dismissed the allegation as mere rumour. The state Commissioner for Information and Orientation, Mr. Yemi Olowolabi, yesterday, in Akure, described the development as a party affair that would be resolved amicably.

He said: “Our governor is a party man. Whatever has happened and whatever happens thereafter will all be resolved at the party level. There is nothing to worry about, as Governor Oluwarotimi Akeredolu remains a party member, a leader of the party and nothing has changed.”

Similarly, the Chief Press Secretary to the Governor, Mr. Segun Ajiboye, said the report was not true, disclosing that the governor and state party leadership had not received any formal letter to that effect.

Ajiboye had earlier refuted that a query was purportedly issued to the governor on March 1 for alleged anti-party activities during the last presidential and National Assembly polls. He explained that the governor did not receive any query from the party at national level questioning him of anti-party activities in the last elections. But a statement credited to APC National Publicity Secretary, Lanre Isa-Onilu and the National Chairman, Adams Oshiomhole, was quoted to have lamented that Akeredolu jeopardised the party’s fortunes in the state.

The Guardian learnt that an anonymous member of the NWC, confirmed that Akeredolu was suspended on Friday, alluding to similar offence and punishment meted on his counterparts in Imo and Ogun States. The source said: “Yes, the governor has been suspended by the NWC. He claimed not to have seen the query, and we asked the National Vice Chairman from the Southwest to make a copy available to him. “After the election, we want to build and not destroy the house. But we want to do the needful. Since we suspended Imo and Ogun States governors, we want to treat them the same way. “We have suspended them, but they need to defend themselves. It is like a query and a suspension. They have to advance reasons why they did what they did…”