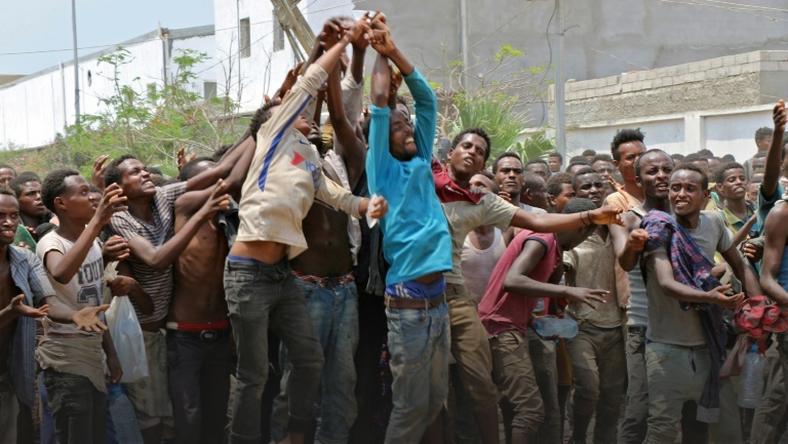 The majority from Ethiopia, the migrants are facing tough conditions after being confined to the stadium in the government bastion, according to the United Nations' migration agency.

"The site is not fit to be hosting anyone, not even one person, let alone thousands," said Olivia Headon, the International Organization for Migration's (IOM) Yemen spokeswoman.

Yemen has descended into chaos over the past four years of conflict, with both the Iran-backed Huthi rebels and a rival pro-government military alliance led by Saudi Arabia accused of acts that could amount to war crimes.

But the country remains on an established route for migrants from the Horn of Africa, who typically first travel by land through Djibouti before eventually undergoing perilous boat journeys across the Gulf of Aden to Yemen.

Mohammed Nour took the well-worn route recently from his native Ethiopia, hoping Yemen would be a temporary stop en route to Saudi.

Many migrants try to make their way through Yemen to Gulf nations such as Saudi Arabia, often looking for work. But many do not even survive the journey, dying at sea or at the hands of panicked smugglers.

Nearly 150,000 migrants arrived in Yemen last year, according to the UN.

The IOM has said that around 92 percent of the migrants were Ethiopian, while the rest were from Somalia.

Southern port Aden -- home to the beleaguered government -- is currently not on the front line of Yemen's war, but still wracked by economic problems and poverty.

Security forces in the city have launched a campaign to repatriate all migrants over the past week, a police source told AFP.

After placing them in makeshift camps in residential areas across the city, most have been relocated to the stadium in the May 22 neighbourhood, the source said.

There, they sit in the open-air arena, picking at bread, pleading with officers or closing their eyes under the hot sun.

"There's no food or drink. There are no bathrooms or showers. We are hungry -- they're killing us with hunger. I told them death is better," Mohammed Nour told AFP.

"We've had problems with the soldiers, with the police. There's no food or water. There’s no shade. We're stuck out here under the sun," he said.

Humanitarian agencies are concerned camp conditions will continue to deteriorate, with reports hundreds more migrants will be relocated there.

"They don't have access to toilets. They have to defecate outside, which is a massive health concern. There is no shelter. There are no blankets," said IOM spokeswoman Headon.

"We have started to truck in water, provide health screenings and distribute food, along with local organisations, but there is limited access to food resources," she added.

The IOM is now working with other UN branches to help migrants in the stadium return home, on condition the return is voluntary.

In January the UN announced plans to airlift some 3,000 Ethiopian migrants to their capital Addis Ababa from Yemen's Sanaa. Hundreds have already returned.

Voluntary flight returns were resumed last year after being suspended in 2015, when the Yemen war took a turn for the worse with the intervention of a regional military force led by Saudi Arabia.

Since the coalition intervened nearly 10,000 people have been killed, according to the World Health Organization, although other groups say the toll is significantly higher.

1/1 The International Organization for Migration has decried conditions at the camp where some 1,800 migrants are being kept